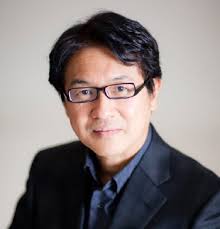 He was born in 1954 in Fukui City, Japan. He graduated from the Department of Architecture, Tokyo University of Science. After graduation, he joined Taisei Corporation, a major domestic construction enterprise, and became a Senior Researcher of the Department of Nuclear Power. There, he launched an in-house venture for the development of computer graphics. After leaving the company, he established “Visual Science Laboratory Co., Ltd.,” a company specialized in CG and VR research and development in 1991. He established “Digital Hollywood Co., Ltd.,” Japan’s first digital creator training school in October 1994. (The university opened in 2005.) He established “Digital Scape Co., Ltd.,” a dispatch agency specialized in digital creators in 1995. He established “Polygon Magic Inc.,” a game production agency in April 1996. He also established “IMJ Corporation,” a Web production agency in July of the same year. He established “Gridmark Inc.,” a solution company that utilizes his invention of “Invisible Dot Code” technology (patented) in April 2004. The CG division of Visual Science Laboratory Co., Ltd. was separated as “Dynamo Pictures Inc.,” a new company in October of the same year.

I was born and raised in Fukui City, Japan. My forefathers were originally well-off. However, due to the post-World War II farmland liberation policy, their farmland had to be given up. My parents tried out various jobs but were not successful, and thus we experienced hard times. Nevertheless, I was able to grow up with the love of my parents.

At the time of graduation from Tokyo University of Science, the job market was in a bad situation and I had to go through several jobs. It was during such a time that I got an opportunity to work in the nuclear power department of Taisei Corporation. My job was on marine nuclear power plants. However, since I had no knowledge on marine architecture, I attended the evening session of Tokai University graduate school on my own money and earned a master’s degree in marine architecture.

I entered the world of computer graphics wanting to simulate earthquakes with more accuracy and reality than was available at that time. That lead me to launch a CAD development department as an in-house venture, fortunately with full support from the company.

My life as a creator began here in the CG world. As in my profile, since leaving Taisei Corporation and becoming independent, I started 7 companies, including CG and VR development companies and a digital creator training school. When I was with a game production agency, I produced a virtual idol named “Kyoko Date” in collaboration with Horipro, a big-name Japanese entertainment company. Some of you may be familiar.

I am often asked why I repeat entrepreneurship one after another. I’ve always been interested in everything, and when I meet people, I always talk about it and the others also become interested. By conversing with people, not only do I get people to become interested in my talk, I myself am able to receive valuable information. The more people I meet, the more merits I receive, and vice-versa. Such chain of interactions may be the reason why I have been able to initiate the series of entrepreneurships. It may also be due to the DNA inherited from my father who started various jobs in the chaotic times after the war.

Although I have repeated entrepreneurship, my five beliefs have remained the same.

Our cards, stamps, and hybrid QR codes are currently being development under the same beliefs. In a society where information is drastically increasing day by day, a simpler and safer system is in demand. We at InterMedia Laboratory Inc. will provide you with solutions that will help to resolve these challenges.